It hits me the most with browsers since I usually open and close quite a lot of tabs during the day. And I tend to do it from keyboard, so sometimes I just hit ⌘Q when I only intended ⌘W.

But this time I suddenly realized that I can easily remap it. I was using this OSX feature for other things, like remapping useless since the typewriter days Caps Lock key, but somehow missed that I can fix this annoying problem too.

If not universally then at least in Chrome (or any other application if needed).

This is really easy: 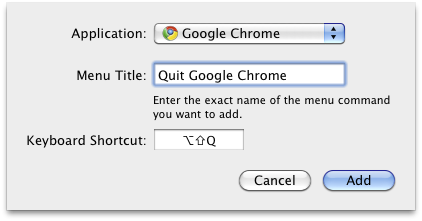 ⌘Q will not longer work, and the new shortcut will be correctly displayed in the Chrome’s menu: 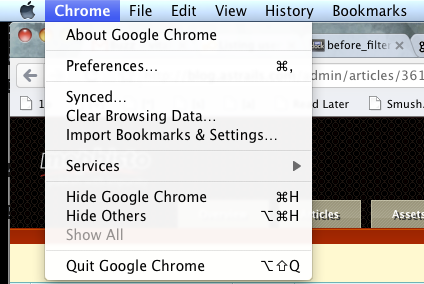 This blog-post is mostly targeted at non-Rails developers. Rails devs should know all this by heart :) Many times we need to explain to our customers what is ‘proper deployment’ and why their current one sucks :) Now we’ll be able to just point them to this post…

Proper deployment is almost not found anywhere. At least anywhere we looked. Very few places really ‘get’ it and assign enough importance to it. Some project owners just don’t know how it is supposed to be, so they accept their developer’s practice of ftp sync to production server :)

If you are a developer, make sure you implement it all.

If you have a project developed for you, then this is a checklist that you can bring to your developers/consultants and require ‘yes’ to every single one.

If your deployment procedure misses any of the qualities listed below, you are asking for trouble.

Production deployment must be:

This is I think the most important requirement. Deployments shouldn’t be done by hand. There are still a lot of companies where a deployment process looks something like this:

This is soooo wrong. The deployment must be done by a single execution of a deployment script, that should do all the work. The maximum developers intervention allowed is entering passwords.

This one is not always possible (for example when doing database migrations), but the idea is that you switch old version with the new one instantly, as opposed to syncing a whole tree of files over ftp. With later you have a noticeable amount of time when some files are already from the new version and some others are still from the old one.

By clean deployment I mean that no files from the old version should be accessible after deploying the new version. Too many times we’ve seen deployments by simply dumping new files into production directory. So files that were removed in the new version remain in place.

It should be fairly easy to revert to the previous version in a case when a major bug found in the new one. (and in case of no db-migrations it should be trivial)

Database schema must be managed by scripts that run during deployment.

You should NEVER manually modify production database schema in a course of a regular deployment. (you might still need to do it to ‘repair’ an automated migration that failed midway, but this should be an exception, not the rule).

Reversibility requirement also means that your migration scripts should be able to both upgrade and downgrade the schema.

To give credit where it is due Rails + Capistrano / Vlad actually suppost all of the above almost ‘out of the box’.

But even with Rails we’ve seen projects that do deployments by running ‘svn up’ in the production directory, or even with just ftp-ing new .css file directly to production w/o even checking it into the version control.

Below is one of the possible ways to do it that passes all of the above (this is how its usually done with capistrano or vlad):