The oh-so-useful github workflow for Alfred

A while back Vitaly wrote a post about LaunchBar. One of the feedbacks we got was to try out Alfred.

After checking it out we switched.

Alfred is an app launcher and then some for OSX. In the version 2 released not that long ago they added brilliant feature - possibility to create your own workflows using nice and simple UI and share them with everyone.

The one workflow I find particularly useful is the Alfred Github Workflow.

The instructions to download and install are provided at the Github page linked above. Once installed you will be asked for your github credentials. The password is not stored, instead the they store your github session cookie. 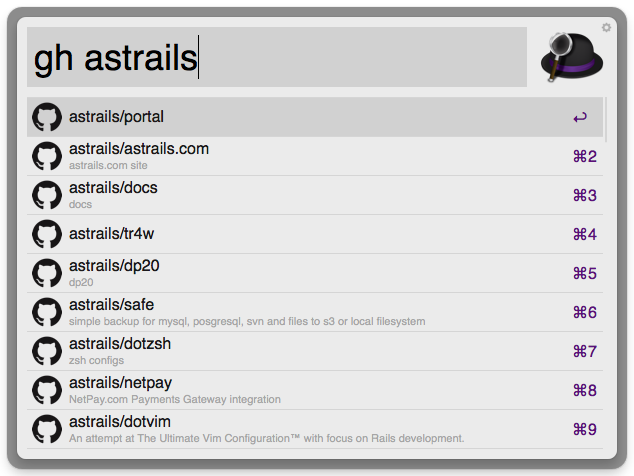 Once you choose one of the repositories you get a list possible actions: 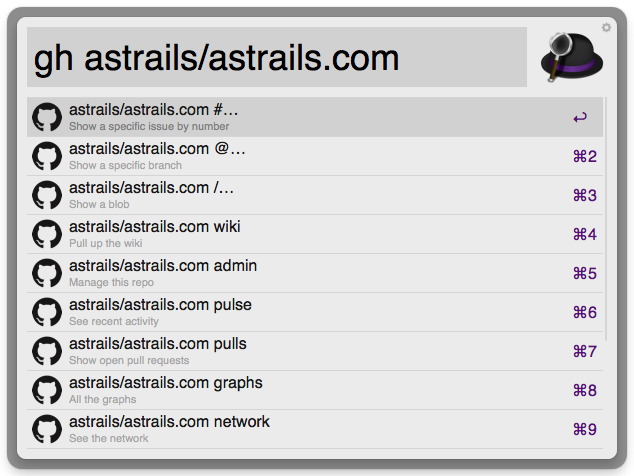 And that about it. Basically, together with Alfred’s fuzzy filtering and always being a keystroke away, it gives me a fast and convenient way to access any of my github repositories.

Adaptive Development and Ruby on Rails.

I had a lot of things to do last Thursday, Feb-17. I met a friend from abroad 3am at Ben Gurion Airport and spent several hours talking before we went to sleep, signed a contract for developing killer web app at 1:30am, and finally gave a presentation at The Junction at 4:30pm.

Late evening I found myself thinking (again) about having at least 32 hours days to have enough time to accomplish all the planned tasks. As a developer I always kept a lot of todo tasks in a queue: some ideas about adding new cool features, some ideas about improving existing ones, some thoughts about refactoring. Unfortunately the queue tends to overflow and todo tasks get lost.

There are two ways to solve that.

Back to the presentation at The Junction. It has 3 parts:

I hope that those who attended the meetup enjoyed it, and those who didn’t would take a look at the slides.

This blog-post is mostly targeted at non-Rails developers. Rails devs should know all this by heart :) Many times we need to explain to our customers what is ‘proper deployment’ and why their current one sucks :) Now we’ll be able to just point them to this post…

Proper deployment is almost not found anywhere. At least anywhere we looked. Very few places really ‘get’ it and assign enough importance to it. Some project owners just don’t know how it is supposed to be, so they accept their developer’s practice of ftp sync to production server :)

If you are a developer, make sure you implement it all.

If you have a project developed for you, then this is a checklist that you can bring to your developers/consultants and require ‘yes’ to every single one.

If your deployment procedure misses any of the qualities listed below, you are asking for trouble.

Production deployment must be:

This is I think the most important requirement. Deployments shouldn’t be done by hand. There are still a lot of companies where a deployment process looks something like this:

This is soooo wrong. The deployment must be done by a single execution of a deployment script, that should do all the work. The maximum developers intervention allowed is entering passwords.

This one is not always possible (for example when doing database migrations), but the idea is that you switch old version with the new one instantly, as opposed to syncing a whole tree of files over ftp. With later you have a noticeable amount of time when some files are already from the new version and some others are still from the old one.

By clean deployment I mean that no files from the old version should be accessible after deploying the new version. Too many times we’ve seen deployments by simply dumping new files into production directory. So files that were removed in the new version remain in place.

It should be fairly easy to revert to the previous version in a case when a major bug found in the new one. (and in case of no db-migrations it should be trivial)

Database schema must be managed by scripts that run during deployment.

You should NEVER manually modify production database schema in a course of a regular deployment. (you might still need to do it to ‘repair’ an automated migration that failed midway, but this should be an exception, not the rule).

Reversibility requirement also means that your migration scripts should be able to both upgrade and downgrade the schema.

To give credit where it is due Rails + Capistrano / Vlad actually suppost all of the above almost ‘out of the box’.

But even with Rails we’ve seen projects that do deployments by running ‘svn up’ in the production directory, or even with just ftp-ing new .css file directly to production w/o even checking it into the version control.

Below is one of the possible ways to do it that passes all of the above (this is how its usually done with capistrano or vlad):